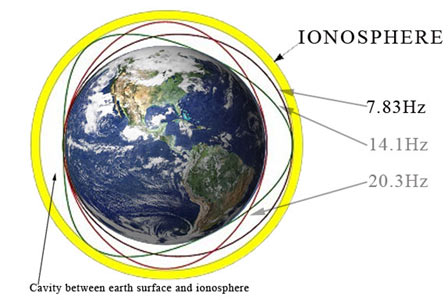 The ionosphere is defined as the layer of the Earth’s atmosphere which is ionised by solar and cosmic radiation. Lying 75–1 000 km above the Earth. The Earth’s radius is 6 370 km, the thickness of the ionosphere is quite tiny compared with the size of Earth. The ionosphere is composed of three main parts, named for historical reasons as: D, E, and F regions. The electron density is highest in the upper, or F region. The F region exists during both daytime and nighttime. During the day it is ionised by solar radiation, during the night by cosmic rays. The D region disappears during the night compared to the daytime, and the E region becomes weakened Earth’s atmosphere and ionosphere. Because of the high energy from the Sun and from cosmic rays, a solar flare, the atoms in the ionosphere have been stripped of one or more of their electrons, or “ionised”, are therefore positively charged.

The ionised electrons behave as free particles. The Sun’s upper atmosphere, the corona, is really hot and produces a constant stream of plasma and UV and X-rays that flow out from the Sun and affect, or ionised, the Earth’s ionosphere. Only half the Earth’s ionosphere is being ionised by the Sun at any time. During the night, without interference from the Sun, cosmic rays ionised in the ionosphere, though not nearly as strongly as the Sun. These high energy rays originate from sources throughout our own galaxy and the universe (rotating neutron stars, supernovae, radio galaxies, quasars and black holes). Thus the ionosphere is much less charged at nighttime, in which a lot of ionospheric effects are easier to spot at night and take a smaller change to notice them. Earth’s ionosphere and ground through which very low frequency (VLF) radio signals can propagate or “bounce” around the Earth. Electromagnetic waves from lightning Lightning discharges produces electromagnetic fields and waves in all frequency ranges. In the extremely low frequency (ELF) range below 100 Hz, the global Schumann Resonances (SR) are excited within the Earths-ionosphere waveguide at frequencies of 7.83 Hz, 14.1 Hz, 20.3 Hz. 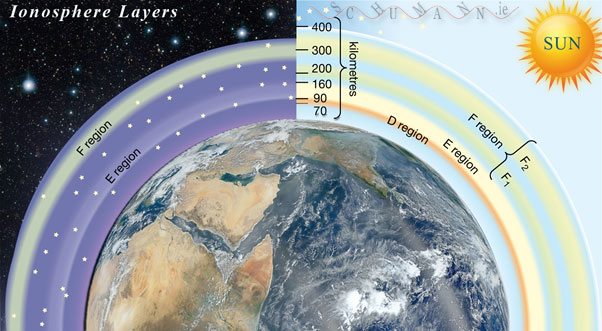 Schumann resonance is an important topic (SR) getting great interest in research areas which has extensive use of Schumann resonances in a variety of lightning-related studies, and connections to global climate change and extraterrestrial lightning. The significance of the research supports the theory that a thunderstorm and its lightning discharges create disturbances in the ionosphere that disturb and distort radio signals and impact communications with orbiting satellites. This suggests that lightning’s electric fields enhance electron attachment to molecular oxygen and reduce electron density in the lower ionosphere. Due to the low electron density in the lower ionosphere, active probing of its electron distribution is difficult. Effects from thunderstorms are poorly understood. Theoretical simulations support the theory that tropospheric thunderstorms create ionospheric disturbances through the influence of the electric field associated with the lightning. 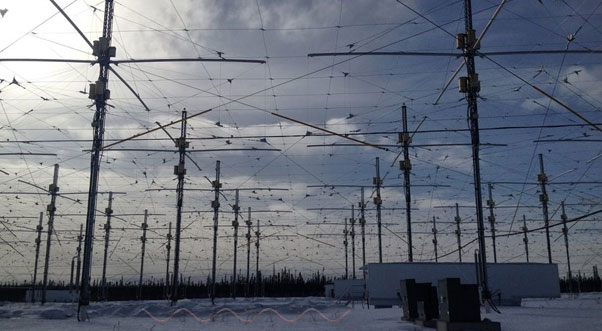 The profile of the ionosphere is highly variable, changing constantly on timescales of minutes, hours, days, seasons, and years. This profile becomes even more complex near Earth’s magnetic poles, where the nearly vertical alignment and intensity of earth’s magnetic field can cause physical effects like the aurora.